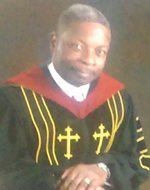 Dr. Ervin Marcellus Scott was born March 1st in Norfolk, Virginia to Mr. and Mrs. Ernest Scott.  He is the first of four siblings.  He has been happily married to the former Ms. Loretta Perkins for 30 + years.  They have two wonderful sons together and seven grandchildren.

Dr. E. M. Scott's former education began in North Carolina public school system in Williamston N.C.  He furthered his education by attending Tidewater Community College and Old Dominion University.  In May 1996 Dr. E. M. Scott received his Bachelors of Arts Degree in Theology, in May 1999 he received his Masters of Divinity from the Richmond Virginia Seminary and in May 2004 earned his Doctorate of Ministry from Norfolk Theological Seminary College.

Dr. E. M. Scott believes that each day is a precious gift from God!  He understands that each day should be lived with thanksgiving and praise for the supreme sacrifice of our Lord and Saviour Jesus Christ.

Loretta Perkins Scott was born in Norfolk, Virginia on January 4th to the late Claude Perkins and the late Ella Hines Perkins.  She is the youngest of three children, with a brother named Claude and a sister named Sarah.  She graduated from Lake Taylor High School and received additional training in the field of Nursing after graduation.  She has thirty-two years of expertise in Geriatric Nursing.  She worked at Sentara Norfolk General for 12 years in Nursing and has performed private duty Nursing for 20 years.  She also worked in the Norfolk Public School System for fifteen years in various capacities.  Sister Loretta currently is employed at the Norfolk Federation of Teachers as a Field Representative.

Loretta Perkins Scott is the founder and former Youth Choir Director at the New Rising Sun Baptish Church.  She is currently chairperson of the Healthcare Ministry.

Sister Scott is the mother of two young men and the proud grandmother of seven.

Sister Loretta is humble and quiet.  She is always willing to do what she can to help save the lost.  Her main goal is to work in the background to help advance the ministries at New Rose Of Sharon Elim Baptist Church.

Sister Loretta loves the Lord and uses one of her favorite Hymns "Jesus Keep Me Near the Cross" as a reminder of just how much.

Sister Loretta is the main support for her husband and many others who depend on her wisdom and love to guide them in the right direction.

The New Rose of Sharon